In 1981, I was an 11 year old girl with curly, dark brown hair in what was undoubtedly a bad hair cut but one that I LOVED (anyone remember the bubble?), hazel eyes and a sprinkling of light freckles across the bridge of my nose. I had long skinny legs and even skinnier arms that looked too long for my body.
I loved my family, friends and playing starting center for the Superstars basketball team. I cheered for the University of Kentucky Wildcats, spent countless hours playing Life with my friend Dana, and had a mad crush on a boy named Brett. I was fascinated by his ability to play Chess. His fourth grade sister was hilarious, his Dad worked for IBM and they lived in a big house. He was the trifecta of crushes.
I started playing clarinet in the school band the year before. I was THRILLED when we started selling candy bars for a fundraiser. I couldn't believe my luck. I felt omnipotent with my hands firmly clenched around the handles and toting that brown cardboard box chock full of candy bars through the streets of the bluegrass state. We had TWO kinds...chocolate and chocolate with peanuts. Each one cost one dollar which was A LOT of money back in the day.
It was a Sunday in February. My mom was playing volleyball at the church rec center and my brother, sister and I all went. She said I could go door-to-door peddling my wares but ONLY on the street where the church was and ONLY if someone went with me. My little brother, dishwater blond hair and swimming pool blue eyes, was eager to go with me.
We were met with several empty houses and a few "thanks but no thanks,kid." I was thrilled when a younger couple, toward the end of the street bought not one, but TWO candy bars...one of each. Later, I would take the police back to their house.
I was confident in my sales skills and powered on despite the cloudy sky and chill in the air.
I quickly felt defeated as we started to walk away from the last house, the one on the corner. No one answered the door and that was as far as we were allowed to go. As we walked down the steps, a man in gray sweatpants came jogging up. He was pleased to see us and desperate to buy some chocolate candy bars. He asked us to wait on the front sidewalk for a  second while he went in thru the back door since he had forgotten his keys.
My little brother and I were ecstatic to sell some more candy. The man came back toward us and asked us to follow him so he could give me the money. We went with him around the corner and slowed as we approached a chain link fence and an empty driveway. I stopped abruptly as he opened the gate because I wasn't going any further.
He gripped my forearm tightly and shoved me into the backyard. My not-quite six year old brother was forced to follow.
The man in the gray sweats wasn't going to buy any candy bars.
He pushed me up against the metal screen door, pulled out a gun and forced the muzzle against my right temple. 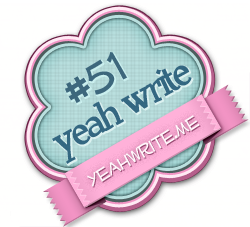 Please go and read the fabulousness at yeah write. If you feel compelled vote for me and 4 others on Thursday.
This is my 200th blog post and only the second time I have written about this incident. The first time I wrote about it was for my high school senior English class assignment of a life changing event. I completed the assignment but never turned it in. It was the only B I would ever receive in an English class.
Posted by Robbie K at 9:44:00 AM

O.M.G.!!! My mouth is hanging open. I can't begin to imagine what that felt like or feels like remembering.

You are one strong woman who never ceases to amaze. Truly.

My stomach is all in knots right now. I am so sorry for the abrupt loss of innocence. I also had mine ripped away frome at a young age and it took years to even speak of it, let alone deal with it. I haven't had the courage to write about it. Maybe one day. Good for you!

No one should experience a loss of innocence because of violence, but especially a young child.

Thank you for sharing your story. It takes an amazing amount of courage to share our words.

OH MY GOODNESS!!!! The end of this story shocked me. So glad you are able to write about it!

You are a survivor, Robbie. I pray that justice was swift and that man was never able to hurt another person. You are brave beyond words for sharing your story today. Thank you.

Oh my God. I hope this horrible man was punished? What happened?

This is just so horrifying! I just want to grab you and hug you. Thank you for being so brave and sharing today. You are an inspiration. A survivor.

Oh my goodness, how awful! Thank you for sharing. I can't even imagine.

Oh, Robbie. This is just so horrifying and awful. My heart goes out to you and your sweet younger self.
I am so touched, humbled and honored that you would share a piece of your heart and past with us today. Thank you for your courage.

I'm glad you survived such a horrible experience, impressed that you worked through it far enough to be able to write about it, and curiously hopeful that this demon of a man was punished to the nth degree.

holy shit, i honest to god feel like i could vomit right now. i'm not even sure what else to say. i'm so incredibly sorry.

Wow, at 11 yrs old with a 6 yr old in tow. Damn... What's the rest of the story? You took the police back to a house... My gosh, no one should have to go through something like that.

Holy crap! What a nightmare! I'm so glad you are still alive today to tell this story. I need to hear the rest of it!

I did not see that ending coming! I want to hear the rest of the story. I hope you will write it.

oh, i am so, so sorry. that loss of innocence is terrifying. sharing it here is courageous beyond words.

Sisterhood of the Sensible Moms said...

Hugs to the little girl you were then. Bigger hugs to the woman you are ow for sharing something so life-changing in such a brave, compelling way. Your writing brought me to the edge of my seat. Great writing, sad story. Erin

Kim at Let Me Start By Saying said...

This is so well written, so engaging, so clear. I felt I was sitting on my steps, watching you and your brother. The light on my face.
I am so sorry that man got his mitts on you, and wish you nothing but peace.
Thank you for sharing this story, for being brave and good.

Oh my gosh. I'm glad you could share this- but how awful, awful awful. I am so sorry for that little girl way back then, and for you now. Unfair doesn't even cover it.

That is terrifying! I can't imagine how you felt as just a little girl in that situation.

I'm in such shock over reading your story. I mean, the mention of the police told me that something was going to happen, but I was not expecting that. It's amazing to me how people can be such monsters. You are a survivor and I hope that writing about it and sharing it with others is therapeutic for you.

Holy shit!! I did not see that coming. I shudder to think what came next. Not an easy memory to write about I imagine. You righly focus on what it was like to be an 11 year old, makes the whole thing more real and more jarring. I'm so sorry this happened to you. Hopefully writing about it helps you heal and close that chapter.

What compelling writing, and what incredible terror. I'm so sorry for you and for your brother, to have experienced that.

I read this days ago, and still haven't figured out exactly what to say.

OHMYGOD. I'm ripped to shreds for 11 year old Robbie. And your little brother.

You're so brave to share this - I hope it helps in the healing process.

What a scary situation and you wrote about it so well! I'm on the edge of my seat, dying to know what happens next. I'm so sorry that this happened to you. Thank you for being brave and sharing it with us.

Oh my God Robbie! This piece seemed so light and fluffy at the start and then, BAM! Oh my, oh my!

I am so sorry. How brave of you to write about this!!!!

Oh Robbie, I know all too well how it feels, even down to having your little brother there. Bless your heart! You did a beautiful job writing this and it couldn't have been easy.

On pins and needles to hear the rest of this story. Thank God you are okay today to tell the story.

wow. this is how to tell a story. I hope you have the courage to keep writing it out. it's painfully beautiful.

I'm sorry that you had to go through this.

Reptiles in the Ice Cream said...

OMG! I am your age so I was happily remembering the time - having the same candy bars to sell. My story was a bit different - how I had to come up with $5 for the ones I couldn't help eating.

You gave me goosebumps from head to toe. Obviously you got away, I am glad you are here to tell your story.

Did you ever continue this story on the blog?

dropping by from Jennifer's link up ...and just stunned!
Oh my goodness. did you ever tell more about this story? you are brave girl!