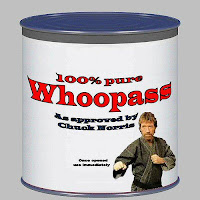 We are a non violent people. I have always taught my kids "we use our words." Physical violence is not tolerated. As an early childhood teacher I have spent countless hours attending in-service trainings on conflict resolution. I work with at-risk children.  Poverty, violence & substance abuse are a way of life for the vast majority of them. I dealt with challenging behaviors all day long in the classroom.

But I am not his teacher or his parent.

Take today for instance. It was a sunny, fall afternoon here in the Land of OZ and Einstein (10) was playing at the rocks with some of the neighborhood kids. The kids love climbing, finding sticks and being at one with nature. This space does not belong to any one person or family though it may be next to certain houses. What should have been a great day outdoors with some friends ends up ruining my son's day.

The freckle faced punk (and I can say that since I too am freckle faced!) cannot be nice to anyone for any amount of time. He has to constantly degrade people and make inflammatory comments. And he gets away with it over and over.

People won't stand up to him or are of the "boys will be boys mentality". Perhaps they don't want to stir the pot and make things awkward in the neighborhood. I learned a very long time ago-nearly six years ago to be exact- that there was no point in saying anything to his parents

If it happens at my house or to my kids then I handle it how I see fit. I even do this in front of his mom since she doesn't seem to want to handle it. Over the years she has had many opportunities to say something if she doesn't like it but she never has. Perhaps she is relieved that someone will deal with it? I have sent him home countless times over the years and banned him from playing at my house more than once 20 times.

Last time I had a little chat with him the punk stayed away for NINE days. That is a lifetime for an eight year old in this neighborhood (and nine days of sheer bliss for me!). While I really only intended to not drive him home for a day or two it was fine by me that he kept his distance.

I won't go into excruciating detail about what happened this afternoon but he was a mean ass stupid head rude, thoughtless, insulting punk to my son. I am not one of THOSE PARENTS who thinks my kid can do no wrong. If anything I am probably too critical of my son at times. I pried the whole story (one side of it anyway) out of my son. While Einstein may have said some things he shouldn't and responded with some name calling he was defending himself.

Unfortunately for me this happened at another neighbor's house. Einstein asked me not to go over there to talk to Freckle Faced Punk, which I can understand and will respect. That being said, I am NOT going to let him get away with it!

Tomorrow morning mean ass stupid head child with challenging behaviors will be coming over to my house and hanging out for an hour until I take them to school. Einstein's solution is that I don't allow Tormentor to come over anymore. And while I can understand his idea, I made a commitment to my neighbor for her kids to come over on late start days (one day a week). We are both single parent (either by divorce or default since Big Yankee lives and works 1231 miles away) and have helped each other out A LOT over the years. She picked my kids up every day after school for a semester and kept them for an hour until I got home from work. She took them to school four days a week last fall so they didn't have to walk a mile by themselves in the cold, rain and snow.  I feel I owe it to her.

I will definitely have a talk with Tormentor tomorrow morning but since I cannot back out of my obligation what can I do?
Posted by Robbie K at 3:18:00 PM

The Preppy Girl in Pink said...

Geez...you need to sell your house for more than just getting back under the same roof with your husband! I appreciate that you are helping his mother out but it is leaving all of you (including your son) in such a bad place. I think your talk with him tomorrow morning decides his fate. You can only be so nice...who is to say what he'll try next. Good luck!

While I will miss many things about my neighborhood he is NOT one of them. His mom just sent me a text that she doesn't have to work so he won't be coming over tomorrow. By the time I do get to talk to him he probably will have forgotten all about it. ARGH!