It comes as no surprise to anyone that I am a procrastinator. Less than six hours left of Monday Tuesday and I am just sitting down to write my Monday Listicles. I had grand plans for this list. I really did. But I also have commitment issues and could not decide which way to take this list.

I considered taking a stroll down memory lane and posting pictures of my kids from Halloween's past. That ain't gonna happen. Most of my digital prints are trapped in our former desktop, and pre digital pictures are in the room formerly known as mine at my parents house.

Next I decided I would post pictures of the top ten fabulous costumes at the Halloween party we attended yesterday. And then I remembered that would take some planning. Something I put off doing over and over and over again. I ended up doing a hodge-podge post and am sharing some I found on the ever popular internet and some we wore.

3. Thanks to the miracles of modern technology I pretty much NEVER watch commercials but I do love me some Flo.

4. Past her prime Hooters Waitress

9. Come on down! You're the next contestant!

10. My first costume party as an adult was Sunday. This is my post party photo shoot. My hair had fallen quite a bit by this point. I was quite flattered and amused when asked where I got my wig. 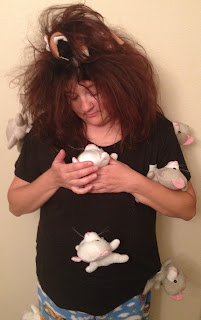 The Junk in the trunk is hilarious! Love the ET and Price is Right contestants.

And the last one? BwaHaHaHaaaa! Hi-Larious. You could totally be a character from Hoarders. That show scares the hell out of me.

I wanted to go as Price as Right contestants but hubs had to work and I thought it would be funnier as a pair.

You know ho wI love to make use of my bug hair :0

We just may have to use the Price is Right contestants one day. That and the ET one. I love an easy costume. That last photo of you, though. Hilarious! So in character you were, too, the way you were looking at that cat. It is a cat, right?

hahah these are AWESOME!!! i love the ET one. and the pinata. and the Price is Right. AWESOME!

Are you a crazy cat lady? In the costume - not in real life!

You know I aim to entertain :)

Thanks! It was a fun and easy costume!

Love your Sunday!! And it looks like your kiddos have your creative streak . That piñata is pretty awesome too. You sound a lot like me when it comes to listicles ( don't tell on me, procrastination is possibly a condition right?)

These were hilarious! Fun post! Now get to work on those family photos! LOL!

Naked Girl in a Dress said...

Cats creep me out on a good day so the last costume is super-scary for me. I LOVE the little piñata!